Joel Corry, yes JOEL CORRY is making his way over to Tampa for the last Rosé All Day Saturday of April on the 30th! See you at the pool

With 5x platinum UK records, 5x BRIT nominations and over a decade of club shows all over the world under his belt, Joel Corry is one of the most revered names in dance music.
He made his breakthrough with 2019’s UK Top 10 single, ‘Sorry’, which also broke the all-time 24-hour Shazam record in the UK with over 41,000 recorded tags, paving the way for collaborations with the likes of David Guetta, Jax Jones and Saweetie, as well as a further four Top 10 records – including 2020’s anthemic UK #1 single and global smash, ‘Head & Heart’ ft. MNEK.
In 2021, Joel also played sold-out headline tours in both the US and the UK, performed and presented at the MTV EMAs in Hungary and held down his debut residency at Ibiza Rocks, where he’ll be returning for a second, 14-week marquee residency later this summer. 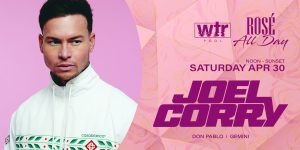