POOL SEASON IS BACK!

Ya’ll mind if we wild out real quick? Nick Cannon is kicking off pool season on Saturday, March 5th in the best way possible!

Actor, comedian, rapper, and entrepreneur, Nick Cannon is a highly successful performer known for his many roles, stand-up appearances, and sketch comedy shows. Born in 1980, in San Diego, California, Cannon first became interested in performing around age eight, and was encouraged to pursue his interest in music via his grandfather, who gave him his first musical instruments. While still a teenager, he moved to Los Angeles to further his stand-up career, appearing at such venus as the Laugh Factory, the Improv, and the Comedy Store. From there, he got his first big break starring in the Nickelodeon comedy sketch series All That. There were also appearances on shows like Kenan & Kel and the Parkers, before he made the jump to film, starring in 2002’s marching band-themed Drumline.
Once Cannon firmly established himself on television and then in Hollywood, he expanded his reach into music, signing to . The young multi-talent made his smash debut in late 2001 with a remake of ‘s 1988 hit, “Parents Just Don’t Understand,” which appeared on the Jimmy Neutron, Boy Genius soundtrack and also featured and . Cannon returned in early 2003 with his self-titled debut album for and its leadoff single, “Your Pops Don’t Like Me (I Really Don’t Like This Dude).” The follow-up single “Gigolo,” featuring , was a huge smash hit. In 2005, Cannon signed a deal with to launch his own imprint, , but his second album, Stages, was never released.
Cannon’s next disc, released three years after he married , was a comedy album, Mr. Showbiz (2011), released on his label. A second comedy album, the ribald F#ck Nick Cannon, arrived in 2013 on the label. A year later, he returned with White People Party Music, an ironic EDM album that featured novelty dance numbers and appearances from , , and others. Around this time, Cannon filed for divorce from after six years of marriage, with the divorce finalized in 2016. That same year, he enrolled for classes at Howard University, and released the mixtape, The Gospel of Ike Turn Up: My Side of the Story. His third standup comedy special, Stand Up, Don’t Shoot, premiered on Showtime in 2017. ~ Jason Birchmeier, Rovi 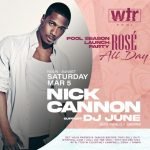