Pulling our hair out in excitement for Samantha Ronson to start the April festivities at wtr! Come hang out on Saturday, April 2nd.
GA & VIP PassesPrivate Cabanas |Tables & Couches CALL 813-786-1300 or TEXT 813-265-1234
Following in the footsteps of her older brother, DJ Mark Ronson, singer/songwriter/guitarist/DJ Samantha Ronson borrows from rock, hip-hop, and pop in her own music. Ronson — whose stepfather is Foreigner’s Mick Jones — picked up the guitar at an early age and began writing songs as a teenager; around the same time, she also started DJ’ing around the city. When she was 19, she decided to make music her vocation as well as her avocation, and recruited her friends to be her backing band for recording and performing. These concerts and demos won Ronson fans such as Duncan Sheik and Roc-A-Fella head Damon Dash, who was a friend of Ronson’s from her DJ days. Dash was sufficiently impressed with her demos to make Ronson the first rock artist on Roc-A-Fella’s roster; after working with songwriters such as Damon Elliott and Dallas Austin, Ronson’s self-titled debut album arrived in summer 2004. ~ Heather Phares, Rovi 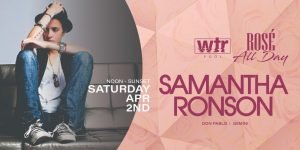