What’s better than a Rosé All Day Saturday with beats provided by Juicy M? Nothing, correct! So come catch a vibe on Saturday, March 19th :

GA & VIP PassesPrivate Cabanas |Tables & Couches CALL 813-786-1300 or TEXT 813-265-1234
Juicy M is a widely known DJ and producer from Ukraine. Having a strong background in hip-hop DJing and turntablism, she has entered the electronic scene like a power blast with her smashing viral videos on youtube of her mixing live on four decks in 2013. Since then Juicy M gained an astonishing number of followers around the world, featured in Billboard’s ‘Next Big Sound’ chart, and has been acknowledged by reputable magazines, blogs, and events like Tomorrowland, Ultra Music, Balaton Sound, and Medusa festivals. 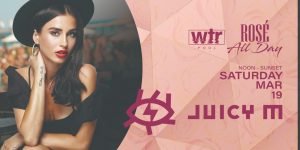