Cat Dealers at wtr this Sunday, March 20th.
The party never stops when the Cat Dealers are in town! Immaculate vibes and sunshine by the pool on Sunday, March 20th! Tell your friends
GA & VIP PassesPrivate Cabanas |Tables & Couches CALL 813-786-1300 or TEXT 813-265-1234
Lugui and Pedrão are the Brazilian brothers behind Cat Dealers, one of the most relevant acts in the brazilian and international electronic scene. In 2021, for the fifth consecutive year, the duo entered the Top 100 of the world’s biggest DJs by British magazine DJ Mag.Since they were signed worldwide by Armada Music in 2020, they’ve been following a consolidated release schedule, with songs and partnerships already highly anticipated by fans. The tracks have been receiving support from big names, such as Martin Garrix, Tiesto and Dimitri Vegas & Like Mike.Cat Dealers 1st major hit, “Your Body”, released in 2016, has more than 140M views on YouTube and 65M streams on Spotify.The brothers have signed remixes for big names in the international scene: “Don’t Worry” by Axwell, which was released at his label Axtone, “Cold Feet” by Loud Luxury, “Who’s Laughing Now” by Ava Max, “Carry On” by Martin Jensen and “I Want Love” by Gryffin & Two Feet.The duo has already played in all 5 continents and recently concluded their US Tour, with more than 30 gigs. They were scheduled to perform on the mainstage at Tomorrowland, which was postponed, and were a part of the digital edition Tomorrowland Around the World in 2020 and 2021 and also played at EDC Orlando.Named one of Forbes’ 30 Under 30, Cat Dealers also play in all major music events and clubs in Brazil, such as Rock in Rio, Lollapalooza, Ultra, Green Valley and Laroc Club. 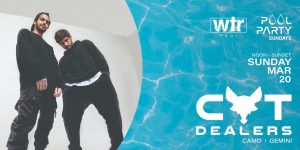