DJ Tay James will be laying down the heat at wtr in this edition of Pool Party Sundays on Sunday, April 10th!
GA & VIP PassesPrivate Cabanas |Tables & Couches CALL 813-786-1300 or TEXT 813-265-1234
DJ Tay James has been making a name for himself behind the turntables and on the microphone since the age of 16. In 2009, however, just months after graduating from Hampton University in 2009 where he’d made a name for himself as the most-in-demand DJ in the mid-Atlantic, Justin Bieber hired James to join his live show as the tour DJ. Since then James continues to travel the world performing alongside Bieber and introducing his talent to sold out crowds around the globe at radio shows, stadium concerts, and festivals.When he’s not on the road with the pop sensation, James continues to headline nightclubs around the world, including his residencies at Playhouse (Los Angeles), FLUXX (San Diego), Muzik (Toronto), and Prive (Atlanta). He is also called upon by an extensive list of celebrity and corporate clients, such as Russell Simmons, Chris Brown, Fabolous, Bow Wow, Beats by Dre, and Adidas, to deejay their private events.James has performed on some of the highest rated television shows such as The Oprah Winfrey Show, The Ellen Degeneres Show, Jay Leno, Tonight Show with David Letterman, and NBC’s The Today Show. He’s also been featured in publications including Teen Vogue, Vibe, Hollywood Life, The Washington Post, Global Grind and Earmilk. 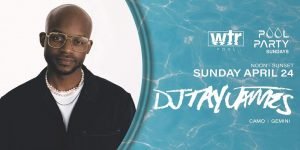