What in the World? How Walt Created Disney World

When Walt Disney realized cheap tourist traps were enveloping Disneyland, he began a nationwide search for enough land to hold every dream he could imagine. What happened next would require a heightened degree of CIA-level secrecy for Disney’s undercover team, who launched a misinformation campaign that included dummy corporations and secret transaction. However, when a keen-eyed reporter cracked the code, Disney was forced to show his hand. Audiences will be amazed to learn of not only subterfuge, but also the monumental innovations and engineering feats required creating a whole new world. 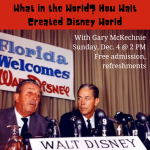