Poor People’s Art: A (Short) Visual History of Poverty in the United States

Dr. Martin Luther King Jr. is well known for his “I Have a Dream” speech, yet much less emphasis is placed on his campaign to seek justice for America’s poor, “The Poor People’s Campaign.” This was a multi-cultural, multi-faith, multi-racial movement aimed at uniting poor people and their allies to demand an end to poverty and inequality. Fifty-three years after Dr. King’s death, the Reverend William Barber II launched a contemporary push to fulfill MLK’s ambitious brief — one that calls for a “revolution of values” that unites poor and impacted communities across the country. The exhibition Poor People’s Art: A (Short) Visual History of Poverty in the United States represents a visual response to Dr. King’s “last great dream” as well as Reverend Barber’s recent “National Call for Moral Revival.”

Poor People’s Art is curated by Christian Viveros-Fauné, CAM Curator-at-Large; organized by the USF Contemporary Art Museum. Poor People’s Art is supported in part by an award from the National Endowment for the Arts; the Stanton Storer Embrace the Arts Foundation; the Lee & Victor Leavengood Endowment; the USFCAM ACE (Art for Community Engagement) Fund Patrons; Dr. Allen Root in honor of his late wife Janet G. Root; and the State of Florida, Department of State, Division of Arts and Culture and the Florida Council on Arts and Culture. 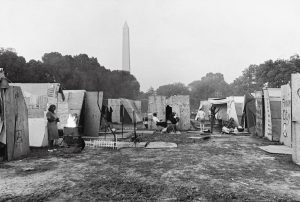