Riggi & Piros are a duo from Northern New Jersey consisting of Anthony Riggi & James Piros. At the young ages of 25, they have amassed over 110 million streams on Spotify alone. Currently signed to Armada Music, they have also released on every other major label that electronic dance music has to offer such Ultra Music, Spinnin’ Records, Tiesto’s Musical Freedom, Doorn Records, & many many more.
Even before turning 21, Riggi & Piros have heavily toured and played key venues such as Hakkasan, Wet Republic, Ultra Music Festival, EDC, and have joined both Deorro and Borgore on their bus tours.   With their heavy melodic smashes and festival ready bangers, they have gained the support of all of the top stars such as Tiesto, Hardwell, The Chainsmokers, Martin Garrix, Zedd, Porter Robinson, David Guetta, Armin Van Buuren, Steve Aoki, Afrojack, and too many more to name.
www.wtrpool.com 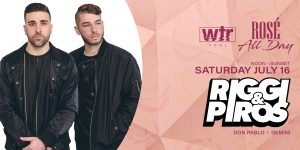