Eleven winemakers, eleven grape varieties, one island, Crete. In the Wine Dark Sea explores the history of a Greek island, the beauty of its people and the unique wines they produce.

In her new documentary, director Chrisa Giorgi aims to demystify Crete as a winemaking region and offers a rare insider glimpse into the indigenous grape varieties and the people behind them. Through a colorful mosaic of stories, the viewer travels in the vineyards found in the valleys and the mountains of Crete, discovers the secrets of eleven indigenous grape varieties, and learns the winemaking philosophy of eleven passionate producers. Follow a journey through time in the steps of Homer to discover “the island called Crete, in the midst of the wine dark sea.”

This special screening is the only time the film will be shown in its entirety in the Tampa Bay area. Immediately afterward, guests are invited to stay for a post-film discussion and Q&A with director Giorgi. Tickets for this special screening are $12.50 ($9.50 for Tampa Theatre Members). A limited number of Pre-Film Reception Tickets are also available for $40.00, which includes a ticket to the film, plus 2 drink vouchers, 2-3 tasting vouchers to try a few Cretan wines, and light hors d’ouvres during the reception hour. The pre-film reception will begin at 6:00pm, with Giorgi in attendance. 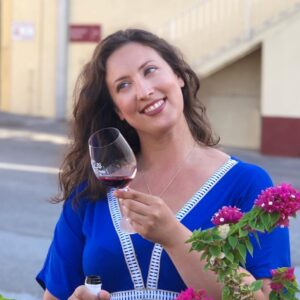 Chrisa Giorgi, Director, Producer: Born and raised in Crete, Greece, Chrisa holds a degree in Political Science and a Masters in Political Analysis from the University of Crete. She has a background as a radio and newspaper journalist. She is Wine and Spirits Education Trust Certified. Her latest film, In the Wine Dark Sea, screened at festivals around the globe, won multiple awards, and is scheduled to be released in December 2022.

Special thanks to Peter Ketchum & Elena Paras Ketchum, and our other generous supporters: