Bruce Davidson (b. 1933) is celebrated for photography that captures the humanity of his subjects. The images display Davidson’s palpable empathy for people of all colors and from all walks of life. A Magnum photographer since 1959, he formulated a practice in which he embeds himself into the world of his subjects, enabling intimate depictions of people who are often on the fringes of society.

Bruce Davidson: New York offers sixty photographs by this esteemed artist, culled from the 360 photographs that are in the FMoPA collection given by an anonymous donor in 2018. It focuses on six series he created in the New York City area from 1959 to 1998.

These series vary from depictions of a disenfranchised gang of youth who hung out in Coney Island in 1959 (Brooklyn Gang) to intimate portraits of the people who inhabited East 100th Street in Harlem in 1966 (East 100th Street). Also portrayed are Holocaust survivors in a Lower East Side cafeteria, the graffiti-laden subway system of the 1980s (Subway), and a dynamic spectrum of people who congregated in Central Park in the 1990s. The exhibition culminates in Davidson’s return to Harlem in 1998 to note the positive changes that had taken place after decades of renewal. 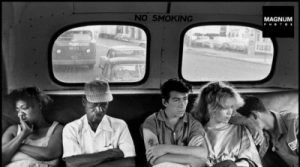