Excited to announce Don Toliver is pulling up to the wtr outdoor stage on October 16th
Grab your Day Passes early before prices go up and reserve tables and cabanas today!DAY PASSES – https://bit.ly/wtrDonToliverDP
TABLES: CALL 813-265-1234 / TEXT 813-786-1300
Streamed hundreds of millions of times in under two years and handpicked for collaborations by everyone from Travis Scott to Eminem, Don Toliver has cemented himself in the scene. He lent his voice to the 2x RIAA-certified platinum “Can’t Say” from Travis Scott’s GRAMMY® Award-nominated, triple-platinum ASTROWORLD. Simultaneously, his mixtape Donny Womack attracted the praise of High Snobiety and Complex who named him on its 20 Rappers to Watch in 2019. To cap off a banner year, he comprised JACKBOYS alongside Travis, Sheck Wes, and Chase B, igniting the self-titled project to score a #1 debut on Billboard’s Top 200. 2020 introduced Don’s full-length debut, Heaven Or Hell, which includes his platinum records “After Party” and “No Idea.” The latter claimed #1 on Billboard’s Emerging Artists Chart as the song moved into the Hot 100. The single generate over 9M+ streams, and blew up TikTok with over 237M views with over 8 million fan-made videos on TiKTok. He garnered the attention of Rolling Stone, claiming him as one of the 10 Biggest Breakthrough Artists of 2020 while Billboard included him in their 15 R&B and Hip-Hop Artists to Watch in 2020. Toliver capped off an incredible year performing “Lemonade” alongside Internet Money, NAV and Gunna on The Tonight Show Starring Jimmy Fallon. 2021 brings Toliver’s sophomore album, heralded by the single “What You Need” and set for a summer release
#wtr #wtrtampa #tampa #dontoliver #poolparty #piedpiperproductionswww.wtrpool.com www.piedpiperproductions.com See Less 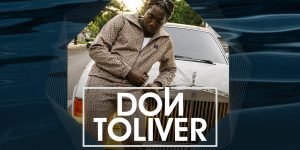