Black Caviar & Le’Cam take over the wtr pool stage June 27th!
Day Passes – http://bit.ly/WTRBlackCaviar
TABLES 813-265-1234 / TEXT 813-786-1300
#WTRTampa #Black Caviar #tampa #edm #poolparty #piedpiperproductions #LeCam
www.wtrpool.com | www.piedpiperproductions.com
Amassing over 200 million Spotify streams so far in their career, Black Caviar has solidified themselves within the dance music world by pushing their music to fans across the globe. The quality of their production shines in any form. The New York City duo always says “we don’t limit ourselves creatively, which sometimes makes it confusing for our management and booking agent.” Since gaining significant notoriety after releasing their 2017 hit single ‘Coco’, which has totaled over 17 million plays, their trajectory has only gone up from there. Originals including ‘El Camino’ and ‘What’s Up Danger’ with Blackway have also made waves and paved the way for fans to embrace the project. The latter, racking up over 92 million streams, was highlighted as the lead track on the ‘Spiderman: Into The Spiderverse’ Soundtrack and found massive success in the form of a Gold Record Certification along with a Grammy Nomination. Coming off the heels of their momentous soundtrack accomplishment, the guys found themselves chosen to produce the official remix of the Charlie’s Angels theme song to be used in the 2019 update of the classic film. In addition to their originals, Black Caviar’s extensive track catalog includes a momentum driven House twist on Dillon Francis’ ‘DFR’, their own fresh rendition of Louis The Child and Foster The People’s ‘Every Color’, and a popular vibrant rework of the Modjo classic ‘Lady (Hear Me Tonight)’ to name a few. Having performed at some of the world’s premiere clubs and festivals including Electric Zoo, HARD Summer, and EDC Orlando, their sets continue to bring an energy to the stage that no one else can, time and time again. Although 2020 has been put on hold amongst the global COVID-19 pandemic, while separated across the country Black Caviar has adapted their songwriting process to produce some of their best music to date. Stay tuned… 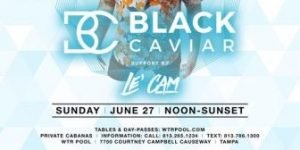