The ¡QUE FUNNY! Comedy Tour is a show featuring Latinx comedians alongside other diverse comics for night of storytelling and laughter. Some of these talented performers have appeared in comedy festivals such as the Burbank Comedy Festival, the Oddball Comedy Festival, and Comedy Central’s Open Mic Fight to name a few. They have also opened for the likes of Paul Rodriguez, Craig Shoemaker, and Dom Irrera.

Every ¡QUE FUNNY! performance is designed for audiences over 18 years of age. 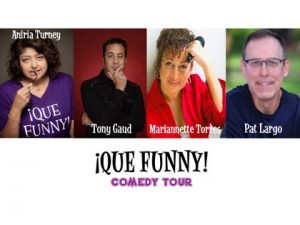