During World War II and Korean War, seven brothers from a black Punta Gorda family served overseas, with little recognition. From a high-flying Tuskegee airman to a grunt in the Red Ball Express, the Bailey brothers’ struggles in a Jim Crow south speak to the past and ongoing struggle to accord black Americans their place in military history.

James Abraham is a former journalist who now edits and publishes books. His Book-broker Publishers, which he founded in 2004, has produced or edited more than 500 books in a variety of genres. Abraham is a popular writing coach, critic, and lecturer. A graduate of Oberlin College, Abraham is the author of “Century: A People’s History of Charlotte County. 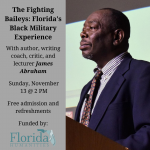