Sister Robert Anne (played by Erin Ruska) will “teach” the audience how to put together a cabaret act as she takes us on a journey of some of Dan Goggin’s (the creator of the “Nunsense” musicals) most memorable songs.

ABOUT SISTER ROBERT ANNE: A self-described tough broad from Brooklyn, this sister is no stranger to cracking jokes and rulers in her lifetime.  A reformed (well…..mostly reformed) juvenile delinquent, today she makes it her habit to praise the Lord, push the limits of her Reverend Mother, and occasionally struggles with her own eleventh commandment – Though shalt not steal the spotlight.  During these tough times, her goal is to have you fuhgedahboutit while class is in session.  She gives special thanks to God, her Mother Superior, Sisters Hubert, Leo, Paul (Amnesia), Wilhem, Father Virgil, and, of course, her bookie Benny.  Now sit up straight, mouths closed, and eyes forward while Robert Anne raises your IQ as well as a little Hell!

Sister Robert Anne’s Cabaret Class is being produced through a special arrangement with Concord Theatricals. 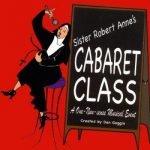