ou better Move It on over to wtr September 25th, Valentino Kahn is set to throw DOWN 🔊
Get Your Passes Now!!
We like to move it, move it:
✅ GA & VIP Passes
✅ Private Cabanas
✅ Tables & Couches
Life is better, wetter 💦

* TABLES *
✅ CALL 813-786-1300
or
✅ TEXT 813-265-1234
Valentino Khan makes everything. The Los Angeles-based DJ and producer is an artist whose music knows no bounds. From producing hip-hop tracks for Grammy-winning artists to pumping out electronic anthems at top venues around the world, he’s been breaking barriers with original tracks, production credentials and live sets.   Valentino recently released his EP on Mad Decent. It includes collaborations with , and . It debuted at #1 on the Apple Music Dance charts and received critical praise across the board.   Valentino Khan burst onto the dance scene with his 2014 debut EP “In Khan We Trust” on ’s OWSLA label. A year later Khan’s track “Deep Down Low” earned the title of “Most Played Track Of The Year” and was SiriusXM’s #1 Song of 2015 on Electric Area. Since then, he’s been tapped for remixes like Calvin Harris & Dua Lipa’s “@One Kiss,” Katy Perry & Nicki Minaj’s “Swish Swish” and more.   Khan has continued his success in the dance world with huge tracks like , , with Sean Paul, and – from his House Party EP. Khan has also produced songs for high-profile artists, including the RIAA Gold “Welcome to the Party” with Diplo, and . He has also produced tracks for , B.O.B., Dizzee Rascal, Iggy Azalea, T.I. and more. His collaborations as a producer include working with Major Lazer on the RIAA Gold song “Bubble Butt” featuring Bruno Mars & Tyga, a main stage staple for years. 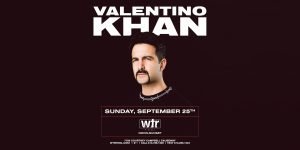