On December 1 – 18, Powerstories Theatre is excited to bring back to stage its original holiday musical, written by Fran Powers, with music/lyrics by Terez Hartmann. This year guests can enjoy the live musical worldwide on December 10 and 17 via two special live-stream events.

A seasonal tradition, Raising Twelve on a Nickel and a Prayer is Fran’s true story, a musical spanning three Christmas seasons, beginning in 1950 and closing in 1966. It follows the love story, adventures, and trials and tribulations of Betty, who dreams of having 12 children, and Harold, her Navy sailor husband.

Performing this musical is especially poignant this year as it will be the last musical on the Powerstories stage on Kennedy Boulevard. In mid-2023, the theatre and the other business in the shopping center are scheduled to be demolished. Developers are converting the space into an eight-story apartment high-rise. Powers’ plans to expand and change the location of the theatre space are in the preliminary stages.

Raising Twelve on a Nickel and a Prayer is a limited family-friendly holiday engagement on December 1-18 at 7:30 PM Thursday – Saturday and 2 PM Sunday matinee, with live-stream available December 10 and 17. Tickets are $30 and $25 for students, seniors, and the military. Powerstories is partnering with Arts4All Florida, a nonprofit organization that promotes the accomplishments of artists with disabilities. Twelve works by these local artists will be featured online and on the lobby art wall during the musical. Powerstories will be collecting nonperishable food for Metropolitan Ministries during the show’s run. Get holiday tickets or gift certificates at https://bit.ly/3SpnopH. 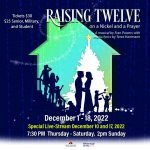