Once Upon a Zoom

Once Upon a Zoom

Once Upon a Zoom is a heartwarming, fun play performed by a talented cast of 7th-12th graders and is a great family-friendly show.

Ava wants friends, which is why she agreed to work with some classmates on a project about the modern relevance of fairy tales.  But as Ava finds herself once again waiting for her partners to show up online and feeling like she has to do all the work herself, she’s suddenly “Zoom-bombed”…  by fairy tale characters!

Ava soon gleans a lesson from timorous Cinderella, brash Maid Marion, besotted Robin Hood, and evil Evil Queen:  her story is her own to write.  Newly determined not to be taken advantage of, Ava is ready to tell the others that their partnership is over.  Instead, she comes to find that her classmates have also learned a lesson about just how relevant fairy tales can be.

Once Upon a Zoom is being produced through special arrangement with Pioneer Drama Service. 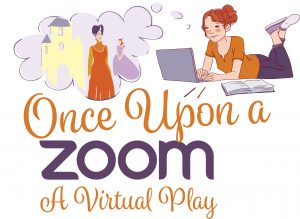