NYC based DJ Scott Petrizzo, better known as Chachi, has been spinning in New York and around the world for over a decade, building up a strong reputation for his impressive turntable skills. Whether he’s performing on the beaches of the Dominican Republic or scratching at the biggest clubs all over the globe, he has found his second home behind the decks. In the past couple of years, Chachi’s career has taken a monumental pivot aimed towards music production. Since making this decision to dive deeper into this competitive realm, a new threshold for his career has been set in place as his remixes of popular classics went viral. With over 80,000 monthly listeners between Spotify and Soundcloud, Chachi has had tracks (namely, his Spinnin Records release “Land Down Under”) surpass 14 million plays cross-platform. 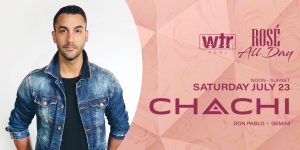