The Florida Museum of Photographic Arts will exhibit The Batture Ritual by Jeff Whetstone, from January – April 2021. This exhibit will display 13 images and a film projection on the micro-and macro-economics and ecologies along the Mississippi River’s batture near New Orleans, Louisiana.

Jeff Whetstone earned a degree in Zoology at Duke University and an MFA at Yale. A self-described biologist at heart, Whetstone explores the cyclical and evolving narrative of a landscape that is not merely a setting for human activity but rather a force that compels humans to adapt. His work varies considerably with each project, but it always addresses the particularities of a place and explores the interplay between geography and human experience. Whetstone’s work has been shown in numerous galleries and art museums all around the United States.

“Batture” is the French-creole term for the thin strip of weeds, trees, and mud between the water’s edge of the Mississippi River and the tall, hardened levees that contain its floods. The batture is ephemeral. It disappears when the river is high and re-emerges when the tide falls; it is swept and transformed. It is a cyclical land, untied to human time, unclaimed, and unowned, a temporary alluvial wilderness. Whetstone does not depict the batture as a dividing line but rather a magnet that draws all manner of life into contact. Images of fishermen and women and close-ups of gutted fish are intertwined by the stark architecture of cargo ships and illuminated by industrial light, ship beacons, and the full moon. Together, they transform the site’s role of an industrial trade artery into a place of ritual and sacrifice.

At the center of The Batture Ritual is a 14-minute video that charts the course of a day on the river’s edge. Shot over the span of two years this immersive video transports the viewer to the lands and ever-changing tides in the rivers of Louisiana.

The Batture Ritual will be on view during regular museum operating hours and is included in the general admission fee. To learn more about this exhibition and other programming at the museum, visit www.fmopa.org. 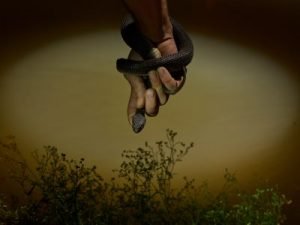