The long-running Off Broadway hit features two actors creating the entire population of Tuna in a tour de farce of quick change artistry, changing costumes and characterizations faster than a jackrabbit runs from a coyote. Two actors, twenty characters, and a barrel of laughs, y’all.

Greater Tuna was originally produced in 1981 in Austin, Texas by its authors, Jaston Williams, Joe Sears, and Ed Howard. The play’s stars, Williams and Sears, played all twenty characters, and Howard directed. One year after its premiere, Greater Tuna opened Off Broadway, ran for over a year, and went on to tour major theaters all over America and spots overseas for the next thirty-some years, becoming one of the most produced plays in American theatre history.

Greater Tuna is presented by arrangement with Concord Theatricals on behalf of Samuel French, Inc. www.concordtheatricals.com 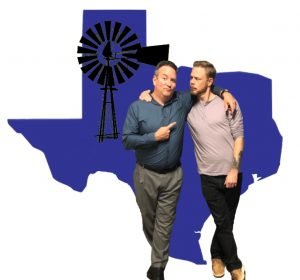