Since its founding in 2004 by Roger Beebe in Gainesville, FL, FLEX quickly became and has remained one of the premiere showcases for visionary short films in North America. It is the only significant festival of its kind in the Southeast. In 2019, the festival relocated to Tampa, FL, under the direction of filmmaker and educator, Warren Cockerham. The competitive festival took place February 6-10 at various indoor and outdoor arts venues around Tampa. Programming included 81 short films in 9 competition programs, 2 programs of expanded cinema, and 3 programs of juror selections.

While so-called independent films have a home in almost every town in the U.S. now (with both festivals and multiplexes or art houses), experimental film and video remains largely the province of major cities, often in their most significant museums and galleries. Bringing this kind of work to Florida serves the very important purpose of alerting those in the region to the very existence of this kind of filmmaking, which is in essence the “high art” of cinema. FLEX works to legitimize the film culture of Florida in the eyes of a cosmopolitan culture that often dismisses the state as a cultural vacuum.

Learn more and view the 2022 film schedule and locations at www.flexfest.org. Tickets are on a sliding scale: $3-$5 per program or $30-$50 for a full festival pass. 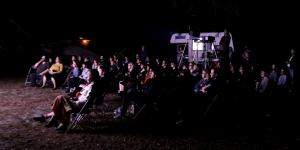