Don’t Just Stand There! Why Your Musical Theatre Audition is Boring and How to Fix It – A Workshop

Don’t Just Stand There! Why Your Musical Theatre Audition is Boring and How to Fix It – A Workshop

Ages 15 and up
Saturday, June 26th, 2021
10 a.m. – 12 p.m.
Is your audition song getting you roles? If it isn’t, it may be time to look inward. Did you know? Directors want to cast people who can sing. But they also want to cast people who can SELL a song.
Are you standing still like a lost puppy with your hands in your pockets and staring at the floor when you sing your audition song? BORING!
In this live-action workshop, director Jim Russell will provide you with unfiltered feedback about why your audition song is boring and how you can fix it.
Participants will be asked to come prepared with one audition song and a backing track and will gain valuable insights and tips on the art of SELLING musical theatre.
Don’t just stand there – sign up today and take control of your destiny!
Instructor: Jim Russell
Jim Russell became Carrollwood Players Theatre’s first full-time Managing Director in April of 2018, following nearly a decade of volunteer service to the organization.
As a CWP volunteer, he served two terms on the Board of Trustees, chaired the marketing committee, served on the show selection and fundraising committees, and was the Volunteer Coordinator and Box Office Manager.
He has also written, directed, produced, stage managed or performed in more than 50 CWP Mainstage and Black Box productions.
A native of upstate New York, Jim grew up in Washington, DC before relocating to Florida in 1986 to study theatre at the State College of Florida. After college, he completed a year-long professional theatre internship and performed at Florida Studio Theatre in Sarasota, FL, and also worked for the Asolo Center for the Performing Arts.
Jim toured the United States as the Company Manager for Children’s Musical Theatre of Alabama, and was the Founding Artistic Director of The Six Legged Theatre Company, which was featured in a nationally televised PBS documentary in 2006.
During his 35-year career in theatre performance, production, and administration, Jim has performed in or directed countless musicals at theatres across the country. Most recently, he wrote and produced Jukebox Saturday Night, produced Godspell, and directed The Full Monty at Carrollwood Players.
Workshop Cost: $20
To purchase the workshop, click HERE then click on “PAY NOW” next to “Don’t Just Stand There Workshop.”
We regret we cannot accept walk-ins. All payments must be made in advance with a deadline of 5 p.m. on June 25th, 2021.
Theatre for All:
A limited number of free registrations are available for this workshop for low income families receiving Florida SNAP benefits.
To learn more, click HERE 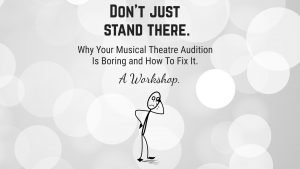