Oscar is a slob. Felix is neat. Oscar loves his bachelorhood, and Felix is newly divorced. When the two decide to live together in the same apartment, how will they reconcile their differences?

This Neil Simon comedy explores the relationship between two men who, despite their many differences, must find a way to live together. Hailed as one of the greatest comedies of all time, “The Odd Couple” won the Tony Award for Best Play. The New York Times said, “There is scarcely a moment that is not hilarious.” Since its premiere, the play has received two Broadway revivals, been adapted to a movie, inspired two sitcoms and has been staged by theatres around the world. Now, American Stage brings to life a contemporary fresh interpretation of this beloved American classic with a modern, multicultural cast. 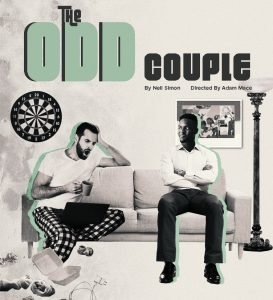