New Tampa Players is producing Bloom directed by David J. Valdez (he/him).
Bloom by Andrew Morton is about 15-year-old Daniel and his mother, Lisa, who are forced to move to unfamiliar Flint, Michigan after the death of Daniel’s father. After a violent outburst at his new school, Daniel’s social worker, Michelle, suggests he spend a week working with her father, Bobby, an urban gardener of several abandoned lots in the middle of the city. A week soon turns into a few months, and, as the two men spend the summer tending the gardens, they begin to plant some much-needed hope in a neighborhood plagued by blight and help each other heal some old wounds. A finalist at the Write Now Festival and a winner of the Aurand Harris Memorial Playwriting Award, Bloom is a coming-of-age story about grief, gardening and growing up.
Auditions will be on Zoom on Sunday, May 23rd from 6PM-9PM and will involve cold readings from the script. Once you have submitted the Google form, we will send you the Zoom link and your audition time. It is recommended that those auditioning log into Zoom via desktop or iPad, as cold readings on a phone may present challenges.
The Audition Form can be found at: https://forms.gle/5DQuca7jRSYQRubx7
Rehearsals will begin in early June and will start on Zoom. Rehearsals will move to in person rehearsals at Uptown Stage near USF on June 5th. Rehearsals will be on Monday, Tuesday, Wednesday, and Thursdays from 7-10 PM with the occasional Saturday or Sunday afternoon. All standard social distancing protocols will be in place for rehearsals and performances.
Mandatory Tech Rehearsals are July 11th – 15th.
Mandatory Performance Dates are July 16, 17, 18, 23, 24, 25
This show contains some mild language and themes appropriate for 14 and up.
All roles are open. Actors of all physical and cognitive abilities are encouraged to audition, in addition to BIPOC and LGBTQIA+ actors.
Roles in Bloom:
Michelle (she/her): a social worker, 30’s, any ethnicity
Bobby (he/him): a gardener, 60’s, any ethnicity
Daniel (he/him): 15, any ethnicity
Lisa (she/her): Daniel’s mother, 40’s, any ethnicity
Ashley (she/her) Bobby’s neighbor, 16, any ethnicity
For more information on Bloom, please go to: https://www.dramaticpublishing.com/bloom 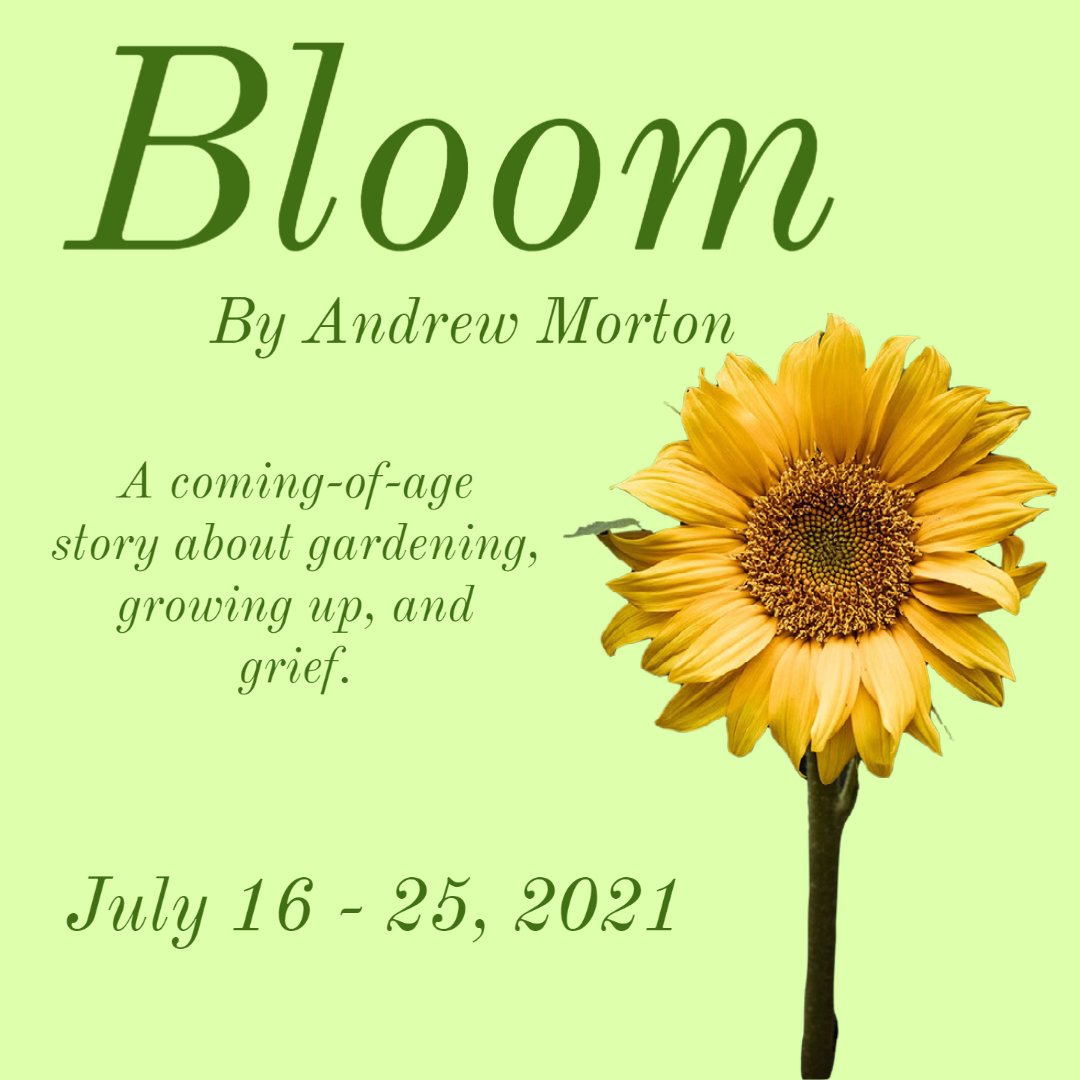