Michael Braun was raised in Rye N.Y. He studied industrial design at the University of Bridgeport. In his early twenties, Michael became fascinated with the color, feel and designs of fabrics. He turned this passion into art that he could wear. Not only did he design clothes, but he often hand-painted, airbrushed or embroidered them. In 1967, he started to race Ocean Racing Sailboats in the Southern Circuit, which starts in St. Petersburg, Fl. A minor sailing accident, however, changed his fate and consequently began selling the clothes that he had designed and sewn.

Word spread to local musicians about these really cool clothing designs, and with his business partner, Toni Ackerman, formed Michael & Toni Designs. Within a year they landed one of their biggest clients, Jimi Hendrix. From that point forward, the client list grew to include many other late 60;s, 70;s, 80’s and 90’s musical artists, including, Sly & the Family Stone, Chicago, Soni & Cher, Bob Dylan, Temptations, Allman Brothers Band, etc. Many of Michael Braun’s outfits are immortalized on album covers, posters and magazines and TV shows too numerous to mention. A jacket he made for Jimi Hendrix hangs in the Rock n’ Roll Hall of Fame.

Later in his career Michael & Toni expanded to dress some of the top wrestlers in the world including Terry Bolea, a.k.a. Hulk Hogan, as well as Macho Man Randy Savage along with many other popular wrestlers. By this time he had moved to a mansion on Bayshore Blvd. in Tampa.

During these years, Michael explored other avenues in art to express his artistic soul. Learning about the vast capabilities of technology he discovered the power to hand paint virtually in many mediums digitally. A natural artistic transition from creating vivid clothes to ethereal pieces of fine art, he found in this virtual realm a comfort and freedom he never dreamed possible… Now, his creations hang in another Hall of Fame, the “Digital Hall of Fame” in Malmo, Sweden. 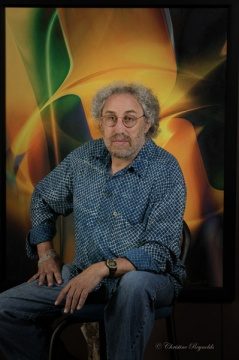