The Sound of the Sea: Seashells and the Fate of the Oceans

The human fascination with seashells is primal. Archeological evidence suggests that Neanderthals collected cockle shells on the coast of what is modern Spain, perhaps preferring those they found beautiful. Native Americans built “great cities of shell” on the coasts, later carted off for road fill. In the 1950s, the nation burned with a shell-collecting fever only a Florida beach vacation could cure. Award-winning author Cynthia Barnett explores the long, rich and surprisingly profound relationship between humans and seashells. Traveling from Florida to the Bahamas to the Maldives, West Africa, and beyond, Barnett uncovers the ancient history of shells as global currency, their use as religious and luxury objects, and the remarkable creatures that make them. While shells reveal how humans have altered the climate and the sea—down to its very chemistry—they are also sentinels of hope for coastal adaptation for climate change, alternative energy and other solutions that lie beneath the waves. 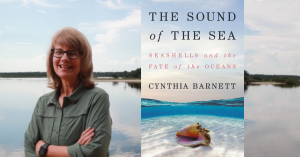