Shevonne Marie Philidor, also known as Shevizzle, is an American singer-songwriter, musician, producer, model, actress, and visual artist. The Tampa native, military brat of half-Haitian descent, is an entertainer who amazes audiences with her one-of-a-kind voice and “true entertainer” quality.  Her strange on-stage mannerisms and creativity make her show one not to be missed.  Each show is different and you never know what your experience will be.  Her funky vibe reveals a vast imagination and ultra-eclectic musical knowledge which translates into her original self-written, self-produced, self-titled album “Shevizzle”, which is full of so many different genres and styles, that it cannot be compared to any other.  Shevonne’s musically genius mind has helped her achieve some feats that others only dream of.  She’s appeared on 4 TV shows; America’s Most Talented Kids, America’s Got Talent (Wild Card Round) and 2 appearances on American Idol (Top 40).  She was also awarded the NFAA National Scholarship in musical theatre and toured the country as part of Todrick Hall’s National Tour of “OZ the Musical”.  Shevonne performs at Music Festivals and venues across the country and her entertainment level is often compared to Prince, Michael Jackson, Aretha Franklin and Whitney Houston, all rolled into one.  Shevonne is not only a self-taught musician, she is also a visual artist and has art Instagram @Shevizzle_The_Artist where her surreal drawings have a nightmarish, yet playful quality that serves as a window into her unusual and fascinating mind. 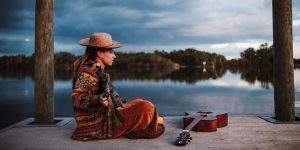