Kid Royal on the Shuffle Yard

With a career in music spanning almost 25 years, St. Petersburg, Fl, based Chris “Kid” Royal has a history in a genre where history is important and somewhat uncommon for his age. He began his career with the likes of Chicago Pete (Jr. Parker, Buddy Guy, Jr. Wells, Jimmy Dawkins, Albert Collins, Lazy Lester) and others such as Douglas Watson (the son of Muddy Waters’ piano player, Lovie Lee) at the remarkably young age of 15. Hailing from a musical family in London, ON, Canada, Chris’ mother, Linda, was a singer who had members of The Band and Janis Joplin’s band sitting in at her gigs. Through her record collection, Chris was introduced to Lightnin’ Hopkins, B.B. King, John Lee Hooker, Sonny Boy Williamson, and many others, inspiring him to begin a musical career of his own. He quickly became known locally as a guitar prodigy.

The current lineup of the band includes sisters Ashley Galbraith on bass and Taylor Galbraith on drums. The energetic, ardent duo has become a fixture of the local music scene in St. Petersburg, FL.

The Kid Royal Band EP features exceptional long-time local, musicians Dennis McCarthy on drums, Vinnie Seplesky on bass and the talented, Michael Hepner on keys. The entire project was recorded live, mixed, and mastered at Big3 Studios in St. Petersburg by local phenom Jim ‘Pinky’ Beeman. The Kid Royal Band EP boasts four all original tunes written by Chris “Kid” Royal, featuring his searing guitar and soulful vocals. The band is poised to make its mark on the blues scene in Tampa Bay and beyond. Stay tuned for more from this quickly emerging group. 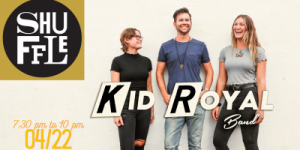